Aimee, now a staff member at #TransMCR and once an attendee, shares with us the story of her involvement with our trans community events. 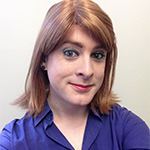 I first came to #TransMCR just after Easter, 2016. I was going through some difficult stuff at the time and being around other people with similar experiences seemed to make sense. Getting away from my little town and vanishing into the big city for a day also seemed like a good idea.

I turned up by myself, feeling a bit nervous, but found my way to the café where a whole bunch of strangers sat milling around. I picked a table that didn’t look too scary and asked if the people on it minded if I sat down. They didn’t mind of course, whether they knew each other or not, I think we’d all come for similar reasons and were likely there because we wanted to talk to others.

There were a few other things going on that day, and it was cool to have options for workshops and things. I thought about going to a few but in the end I just sat around chatting with other people. What I needed on that day was just to talk to others in a space where I knew I could be accepted and where other people had some idea about the things I was going through. That’s what I got and when I left the world didn’t seem quite as bleak.

I didn’t make my second #TransMCR until February 2017. Much had changed in my own life by then, but the space was as welcoming as ever and the event had much the same vibe. #TransMCR is very much whatever type of event people need it to be. For some it’s a place they can be themselves, for others it’ll be something else; a chance to catch up with friends, something to do on a Saturday, an opportunity to do a workshop or activity or a chance to ask questions about things they’re not sure about.

The other difference was that I was a member of staff now (like I said, a lot had changed in my own life!) and it was nice to be able to make sure others felt as welcome, comfortable and accepted as I had when I’d first turned up. I’m really proud to be able to be involved with an event that means so much to so many people and has the opportunity to make a real difference in people’s lives and experiences.