We met with Gabriel to talk about diversity and visibility in the trans community and his experiences of volunteering at LGBT Foundation. Gabriel is one of our Community Leaders on the Trans Programme team. To find out more about our Community Leaders, click here: http://lgbt.foundation/who-we-help/trans/volunteer... 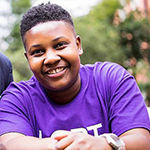 Can you introduce yourself and share a bit about yourself?

Hi, my name is Gabriel Barnes and I’m a trans man originally from South Africa. I came to England in 2008 leaving for safety as my family was actively too much into politics, so fearing to be killed after my father was shot to death by opposition political party ANC whom as well murdered my mother in 1994. I grew up knowing my father as my only parent along with my older sister who’s also here in England. While living in South Africa my family attended a Jewish place of worship and no LGBT topics came up within my family so I never knew that the LGBT community existed.

Moreover, coming to England in 2008, I was a teenager and my interest towards females was already clear in my mind but didn’t have anybody to share it with and too much had already happened in my life so didn’t want to scare my sister even more. I seeked asylum and got looked after by social services in London and my sister was sent away to live with other adult asylum seekers in Liverpool, so this separation as hard and painful it wa,s it made me stronger in order to get to know myself and learn about other people around me from different backgrounds.

I became involved with LGBT groups in London UKLGIG for a short time and went more involved with Movement for Justice by any means necessary, Albert Kennedy Trust and NUS Black student campaign LGBT rep elected in Leeds 2013, so becoming active and connecting myself with my community has worked out for the best. I have been living openly as a butch lesbian and always dominate as man in the relationships I have had in the past and currently, I have never felt like a female or live as one, I have male friends and they see me as guy and even my LGBT mates we see each other as brothers not sisters Nope! My relationship with my sister is completely failed and we don’t see each other, we are just two worlds apart because now even I identify myself as transman and she doesn’t want her daughter to grow up with a person like me she says, as she looks at my life to be toxic.

I moved from London to the Midlands to complete my education as I couldn’t get into university after I finished BTEC National Dip Science level 3, so I continued onto another course Access to Nursing until I found a scholarship that helps asylum seekers with tuition fees but I didn’t get the scholarship until having to do my 5th course in 2014 Access to Science, thanks to university of Salford for seeing my handworks in wanting to achieve good education regardless of the hold Home office has towards asylum seekers. However, my transition started a while ago to live my life as a man I just needed to start the procedures with medical sector to start hormonal replacement therapy, also thanks to many YouTube videos and LGBT foundation groups that are available for trans such as Morf that I started attending while I live and study at university of Salford.

Lastly, I love studying science and I enjoy being a DJ because I love music. I thank God every day for creating me with an LGBT rainbow around me.

How did you find out about LGBT Foundation?
I heard about LGBT foundation during pride I once attended with my friends and university of Salford gave me information that LGBT foundation has many groups which are held regarding immigration and on how to go about my transitioning.

How has volunteering affected your health and wellbeing?
I began volunteering at the LGBT Foundation since June this year at #TransMCR and I’m looking forward to volunteering over Sparkle weekend and at Manchester Pride. I thank LGBT foundation for giving me the opportunity and I hope one day I can open my group to educate and to articulate more LGBT people from other countries and asylum seekers. My health and wellbeing has improved as I enjoy the spaces LGBT Foundation provides for its community.

What does trans visibility and trans awareness mean to you?
Its an important time to amplify voices across the diverse trans community and honour who we are as people, to embrace our diversity and to raise awareness of the challenges we still face.

What advice would you offer someone questioning their gender identity or newly out as trans?
I will encourage them, make them comfortable and listen to what they are going through as every trans story is different and difficult on its own. I will let them know they are not alone and they should never think negative about themselves because being positive in hard times determines the courage in you to handle a situation. No amount of pain or situation is permanent, trouble today and tomorrow is a problem solved because stamina is a quality.