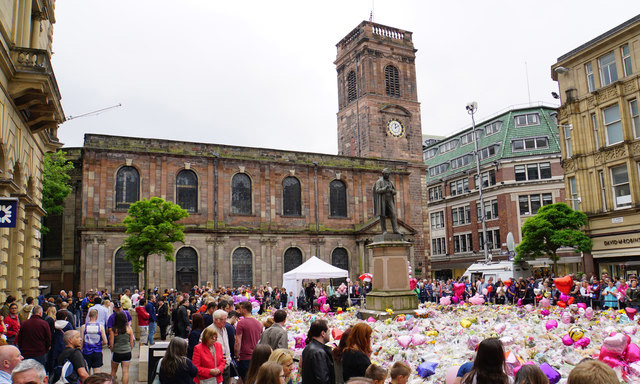 On the anniversary of the attack on the Manchester Arena, our CEO and Chair look back on the impact this had on all sections of the community, remember those we lost, and recognise how the resolve and resilience of our communities ensured that darkness failed that day and made our city even stronger.

May 22 2017 is a date we will never forget. The Manchester Arena attack left 22 people dead, many hundreds injured, and many more deeply affected.

Many have said that the days that followed were extraordinary, as people came together to send out a clear message that we are stronger than them. And it was remarkable because hope took hold of our city. Our place was surrounded by a sense of love and togetherness that you could almost taste in the air. Light sent darkness packing. But it wasn’t extraordinary - it was Manchester showing the world who we are. It was Manchester doing what we do best - supporting each other with strength and power.

LGBT people are part of that story. Our community grieved, our community played an important role in our city’s response, and our community is still part of Manchester’s recovery.

Today, as we mark the first anniversary of that terrible attack, we will be coming together again to remember those lost, to think of those injured and affected, and to thank those brave people who responded on the night.

You will all remain in our hearts, today and always.