LGBT History Month is a key point in the LGBT calendar - a time for us to seek out the histories of our communities and share our stories. Knowing our history helps us to see where we have come from and acknowledge those who came before us. It gives us the opportunity to learn about those who fought for the rights we have today, whether in big strides or in the revolutionary act of quietly living as their authentic selves. But even today, there are stories within our history which are overlooked, and parts of our community who still struggle to have their stories told. This LGBT History month, it’s time to seek out a full and varied range of stories and make sure that everyone’s voices are heard.

Bi historical figures such as Freddie Mercury are often cast as gay in the retelling of their stories, and bi histories are erased as someone’s sexual orientation is overlooked due to the gender of the person they ‘ended up with’.

Throughout history, women’s contributions to society have often been ignored. From Audre Lorde and her work that helped shape intersectional feminism, to Brenda Howard, a bi activist known as the ‘Mother of Pride’, and Stormé DeLarverie, an activist and performer who helped inspire the crowd to action at Stonewall, LGBT women have been instrumental in changing the world we live in for the better.

To not tell the stories of QTIPoC (Queer, Transgender and Intersex People of Colour) means we erase vital parts of our shared history - from the many LGBT artists of colour involved in the Harlem Renaissance of the 1920s such as Bruce Nugent and Jessie Fausset, to the contemporary history of trans icons such as Janet Mock and Laverne Cox making waves in representation today.

Trans people have always existed, and throughout the world have been key members of communities throughout history. Figures such as James Barry form an important part of trans history, and so too do the long established communities that still exist today. The Hijra in India and the Chibados of Ndongo and Matambo (modern day Angola) are proof that before Western colonisation, many nations and peoples celebrated and uplifted multiple gender identities.

The stories of disabled LGBT icons are often excluded, even though approximately one third of LGBT adults identify as having a disability. Though we may know about Frida Kahlo and Lord Byron as figures in LGBT History, the fact that they were disabled too often goes unmentioned. Barbara Jordan was a political pioneer and is considered a disabled LGBT icon, and fought hard to protect minority voter rights throughout her life, and her story deserves to be told alongside all others.

This is all just a small sample of the groups whose histories go untold. LGBT people have always existed, and so too have all the groups within the wider LGBT community. It’s important that we ensure all voices are included and uplifted in the LGBT community, and learning each other’s histories is a key way to achieve that. By learning more together, we can understand where we’ve come from, and how to keep marching forward in our journey. Let’s seek out our varied and colourful history that’s truly representative of who we are. This LGBT History Month, how will you make sure everyone is included? 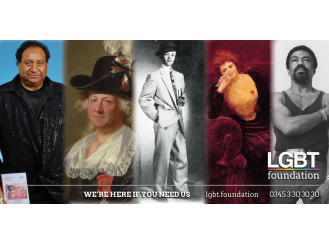 LGBT History Month: ​Five LGBT people from history whose stories you should know