When did you first realise you were bisexual?

I can’t remember when I first realised I wasn’t straight. I’ve tried looking through old journals, noting the cringe worthy “omg that actress is soooo pretty!” scattered about the pages, but at the time I was oblivious to the fact that my “girl crushes” were different to those of my friends. It wasn’t until I was in my final years of school and the start of college that I began to identify with bisexuality, first learning of its existence and then understanding how it fit with my own sexuality.

How did you come out? What were people’s reactions?

I didn’t do anything with that knowledge for years, keeping it close to my chest and being vague with language when anyone spoke about relationships. I went to an all-girls secondary school where biphobia was subtle pinprick comments (“oh she’s only bi because none of the boys will date her”/ “she needs all the options she can get”), so learnt to hold it in. It wasn’t until university that I was open about it, revelling in the freedom and finding queer friends who were as sure and glorious in themselves as I dreamed of being.

I came out to my parents years later, halfway out the door to a date when I blurted, “it’s a girl”, and legged it. We didn’t really speak about it until I wrote a poem for the LGBT foundation’s lesbian and bisexual women’s open mic night this year. I shared the poem with them and my aunts, and I think that’s the first time they realised how integral being bisexual is to my identity. I burst out the closet drunkenly to my school friends, casually dropping that I’d been seeing a girl for a few months. These weren’t the best way to come out, but I had been burning quietly for years. Coming out is incredibly personal and stressful, but you know when you’re ready.

Have you experienced biphobia?

I’m lucky in that a lot of my friends and family are LGBT+ allies, so I haven’t experienced direct biphobia from them. It’s the more subtle things; coming out and being asked, “so how many guys and how many girls have you dated? Have you slept with both?” as if my identity is something I have to prove. I used to work in a very middle-class country pub where the regulars once had a very loud, very homo-/bi-phobic discussion (“oh sure, I don’t mind gay people, but if my son was one I’d beat it out of him”). It was so incredibly upsetting for me to hear, insults slung across the bar while I was pouring their drinks, so I ended up shouting and outing myself. It took me a long time to grow confident enough to challenge this sort of behaviour, but I think a lot of biphobia is routed in ignorance and a fear of the unknown.

Why is Bi Visibility Day important?

Bi Visibility Day is so important because we’re never going to be able to eliminate biphobia unless the community shouts louder than those who seek to demean and erase us, unless we actively counteract the ignorance and promote bisexuality as a valid and lovely identity. Because it is lovely. I love that the label itself is inclusive, beyond binaries and cisheteronormative assumptions. My understanding of my own identity is expanding as I learn more about the nuances of attraction and how I experience it, and I love how bisexuality can encompass this. I love the community and the people that are advocating for greater bi visibility and rights; the people with international platforms who are coming out and saying, “here we are. I am not afraid to call myself bisexual and I’m not going anywhere”. I’m trying to do the same. With more exposure through events like Bi Visibility Day, I hope more people feel free and safe enough to be authentically themselves. 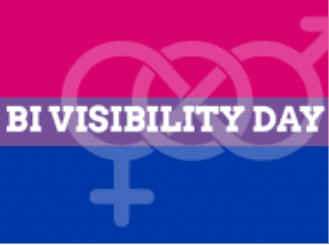